Cops and Guards Getting Away With Murder (Taser Edition)

‘Excited delirium’ might sound like a medical condition, but it’s not recognized by the American Medical Association. Nor will you find it in the Diagnostic and Statistical Manual of Mental Disorders, the preeminent text for diagnosing mental illness. Yet the so-called condition, in which a person allegedly becomes uncontrollably and fatally manic, has been used as a pseudoscientific smokescreen to protect those who tase people to death, as well as the manufacturers of Tasers, from prosecution.

Taser International, the leading manufacturer of stun guns, has latched onto excited delirium, an ill-defined concept that two medical examiners applied in the 1980s as the cause of death for three dozen women in South Florida. The notion was debunked, the deaths explained as asphyxiation after the bodies were exhumed and properly autopsied. Nevertheless, its proponents have an elaborate explanation for how excited delirium can strike: a sudden and enormous dump of adrenaline sends a person into extreme psychosis, which overstresses the body and causes death. 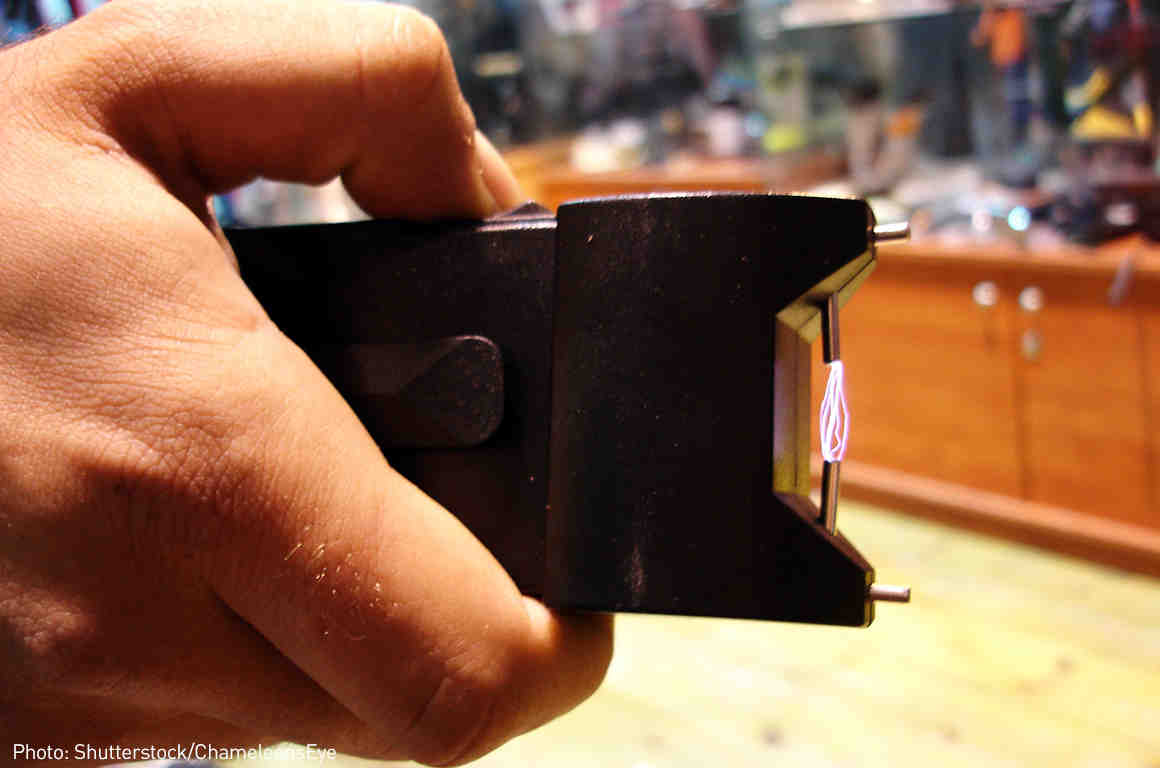 Consider the statement Taser International distributes to police departments to use in the event of a death involving a Taser: “We regret the unfortunate loss of life. There are many cases where excited delirium caused by various mental disorders or medical conditions, that may or may not include drug use, can lead to a fatal conclusion.”

Those who are mentally ill or addicted to drugs, the story goes, are especially prone to excited delirium. In short, dying after being tased is the victims’ fault, especially those victims whose mental health and substance abuse problems can bring them into contact with the police.

Earlier this month, excited delirium was evoked to explain away the death of Natasha McKenna, who died in custody earlier this year. When McKenna, a schizophrenic 37-year-old, resisted attempts by the guards at a Virginia jail to move her out of her cell, the officers cuffed her hands, shackled her legs and covered her face with a mask. Then they tased her four times — that’s 50,000 volts per tase. Within minutes, McKenna stopped breathing and lost consciousness. She never came to and died days later.

In the report of the investigation into McKenna’s death released by Commonwealth Attorney Raymond Morrogh, he concluded that the officers involved had done nothing wrong, none would be criminally charged and that the death was not the result of the officers’ tasing, but rather was caused by “excited delirium syndrome.”

Taser International is pushing excited delirium into the world of forensics, hard. Taser distributes books and information about excited delirium to medical examiners and police departments. It does so even after police psychologist Mike Webster blew the whistle on excited delirium in 2007. Webster investigated the death of a man in Vancouver airport after he was tased at least five times by officers. Police tried to hide behind the diagnosis of excited delirium, but Webster concluded that it was a “mythical” condition promoted by Taser International to justify the “ridiculously inappropriate” use of Tasers. The man’s death was ultimately attributed to a heart attack triggered by the Taser shocks and was ruled a homicide.

Taser International has a strong interest in defending its “non-lethal” weapons. Amnesty International reported that at least 500 people in the US have died between 2001 and 2012 after being shocked with Tasers during arrest or in jail. For the police, jail and prison guards, and their superiors, excited delirium is a convenient way to point the finger away from themselves and away from inconvenient truths about our criminal justice system.

In Ohio, Taser International even went as far as successfully suing a local medical examiner to change the results of three autopsies in which the examiner determined that Tasers had contributed to the men’s deaths.

In Natasha McKenna’s case, blaming “excited delirium” keeps law enforcement from looking at the root of the problems that caused her death: our police and jails’ mistreatment of people with mental illnesses.

McKenna was diagnosed with schizophrenia at age 12. By the time she arrived at the jail where she would die, her illness had resulted in several run-ins with police, and she had been sent to a psychiatric hospital. She was in jail on an offense stemming from her schizophrenia. Although all involved knew about her condition, when it came time for her to be moved to another jail, officers didn’t call on mental health staff to help with the transfer. When she began to resist, the officers amped up their use of force, shocking her when she refused to bend her shackled legs so she could be strapped down in a restraint chair. Instead of working to calm McKenna or calling for help, the officers reacted in seconds with violence. That is how she died. Not “excited delirium syndrome.”

This charade doesn’t belong in the world of law enforcement. The nation is demanding accountability from officers of the law, not obfuscation and excuses. People like Natasha McKenna, who have been killed after violent clashes with law enforcement, deserve justice – not a dubious cause of death that puts the blame on them.

Source: This piece originally appeared at The Guardian.