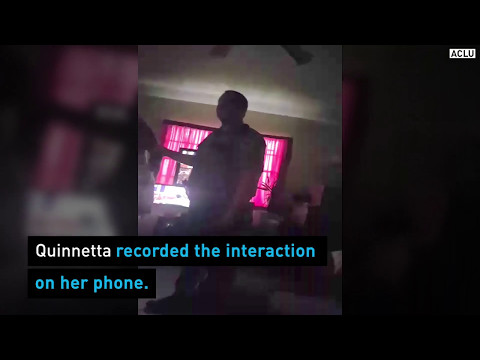 Video Caption: The Madison County Sheriff’s Department is systematically targeting people for alarming police practices based on racial profiling. Deputies forced their way into the Manning home, demanding they write a witness statement about an alleged crime they didn’t witness or go to jail. Terrified for her family’s safety, Mrs. Manning wrote what they demanded while her husband—a disabled man who uses a cane—was dragged down stairs and beaten in a patrol car until he, too, wrote a false statement. Madison County Sheriff’s deputies stop, search, and arrest innocent people day and night, when they are doing nothing more than going home, walking down the street, or sitting in their very own living room. That is against the Constitution, and amounts to racial profiling on a massive scale.

Plaintiffs in the lawsuit Brown v. Madison County are filing a motion for class certification, so they can represent everyone affected by the Madison County Sheriff’s Department’s Policing Program that targets Black individuals for searches and seizures on the basis of their race. In six months of discovery, the ACLU of MS along with our co-counsel, the law firm of Simpson Thacher & Bartlett LLP, have developed substantial evidence of this Policing Program, which is executed by the Madison County Sheriff’s Department at the direction of Sheriff Randall Tucker.

One of the key components of the Policing Program is the disproportionate placement of roadblocks in predominantly-Black neighborhoods. Another essential component is the Madison County Sheriff's Department's policy of suspicionless stops and searches of Black pedestrians in majority-Black neighborhoods, particularly in the vicinity of the majority-Black apartment complexes located in and around the city of Canton.

Our lawsuit intends to end the Policing Program and to put structures in place to ensure it cannot happen again.

ACLU Files Motion for Class Certification in Lawsuit Against...