Drug-related offenses dominate prison admissions in Mississippi, accounting for 1 in 3 admissions in 2015. They’re also a major reason why so many people are stuck in prison in the state – despite a 38 percent decrease in the number of people in prison for drug offenses since 2011, people serving time for those offenses still accounted for more than 1 in 5 people in Mississippi prisons in 2018. While Mississippi has adopted reforms to reduce sentences for drug admissions, the average length of imprisonment grew by nearly 40 percent between 2005 and 2015, and state law requires extraordinarily long sentences. For example, selling just 2 grams of most drugs carries up to 20 years in prison in Mississippi.

Unsurprisingly, Mississippi’s mass incarceration crisis has had an enormous impact on people of color, especially Black people. As of 2014, the proportion of Black people imprisoned in Mississippi was the third highest in the country. While Black men constituted 65 percent of the male prison population in 2016, they made up only 34 percent of the adult male population in the state. Ending mass incarceration is a critical — although insufficient — step towards addressing racial disparities in Mississippi’s criminal justice system as well as its broader society.

And all this incarceration is expensive – in 2015 Mississippi spent $327 million on corrections, nearly 6 percent of the state’s general fund expenditures.

But it doesn’t have to be this way.

Transforming incarceration in Mississippi starts with our Blueprint for Smart Justice.

Were Mississippi to follow these and other reforms outlined in the ACLU’s Smart Justice blueprint, by 2025 it could have 8,744 fewer people in its prison system, saving the state nearly $350 million that could be spent on schools, roads, and other resources that would strengthen communities. 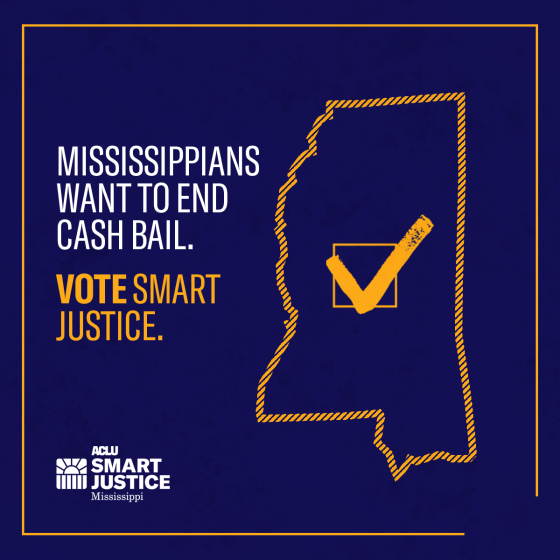 ACLU of Mississippi Releases Blueprint with Roadmap for Cutting...