Mississippi is a state of locals—one in which undocumented immigrants are an undeniable part. Almost 80 percent of undocumented Mississippians have lived in the United States for over five years. These individuals and their families, many of whom are Hispanic, are our friends and neighbors. They make up the fabric of our communities. As Mayor William Truly Jr. of Canton articulated at a field hearing on the 2019 ICE raids, Mississippi immigrants “are not gang members, rapists, or murderers, but folks who work, pay taxes, purchase goods, [and] take care of each other and their families.”

Despite immigrants’ indispensable position at the local level, Mississippi counties are currently rated as amongst the highest in the country in terms of their involvement with Immigration and Customs Enforcement (ICE). We share places of worship, our children attend the same schools, yet undocumented immigrants and their families are increasingly driven into hiding by the threat of federal immigration authorities whose presence in our communities is made possible through arrangements with local law enforcement.

This policy brief outlines several ways in which this interagency entanglement takes place. The brief is divided into three sections. First, it addresses ICE detainers, which extend local detention to facilitate the transfer of an individual to ICE custody. Second, it assesses state and local practices and policies that lead up to that initial detention. And finally, it provides recommendations for local, state, and federal entities.

ICE detainers are voluntary requests in which federal immigration authorities ask local jails to hold individuals for up to an additional 48 hours after their initial detention period. The threats they pose to local policing and communities are expansive:

Academic research and community testimony confirm that the existence of a pipeline from local to federal agencies promotes discriminatory policing and public harm at the local level. The practical effects include:

Mississippi’s legislative framework exacerbates the damage caused by local-federal entanglement. There are two sites in which these policy obstacles are most apparent: 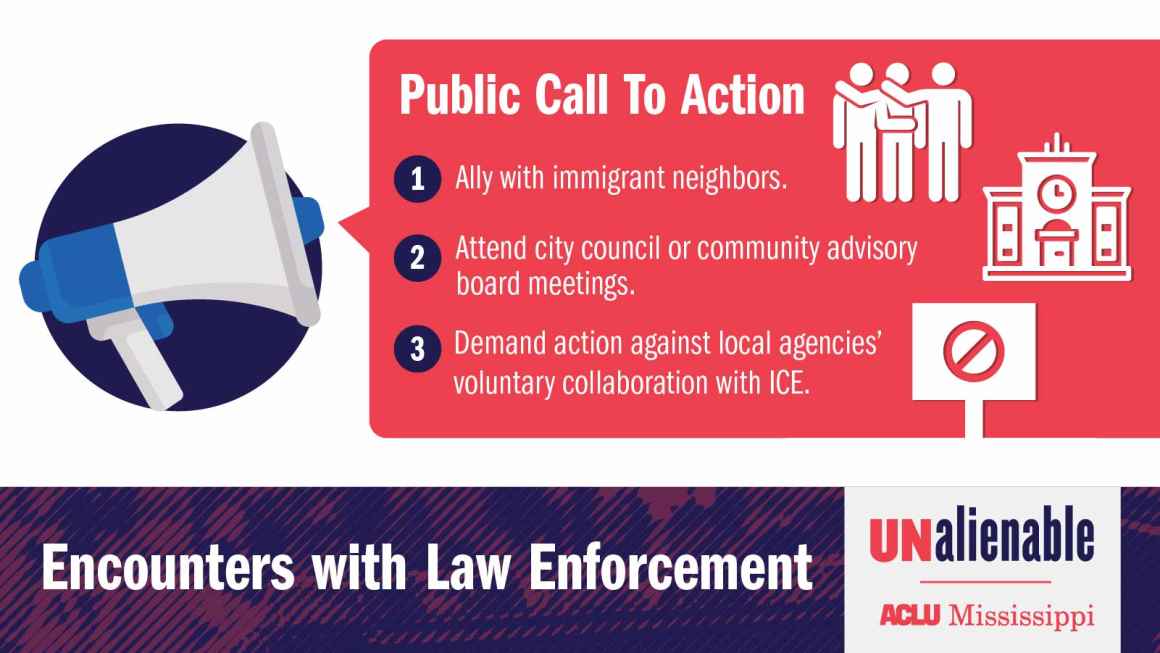 For state and local bodies

For the Biden administration and federal agencies

ACLU of MS Launches Unalienable, a Campaign to End Partnerships...