Blueprint Polling surveyed 872 likely Mississippi votes between June 28, 2022, and July 6, 2022, using live agents to record responses. The margin of error is +/- 3.3%. Blueprint Polling weighted the results to reflect the age, race, and gender of the likely general election turnout.

The results are as follows:

The average Mississippian’s view on abortion is not as clear-cut as some state lawmakers paint in their remarks. A slight majority of Mississippians actually disagree with the Supreme Court’s decision to overturn Roe v. Wade (51% oppose and 42 % support). In fact, only 18% of Mississippi voters want abortion to be illegal in all cases. 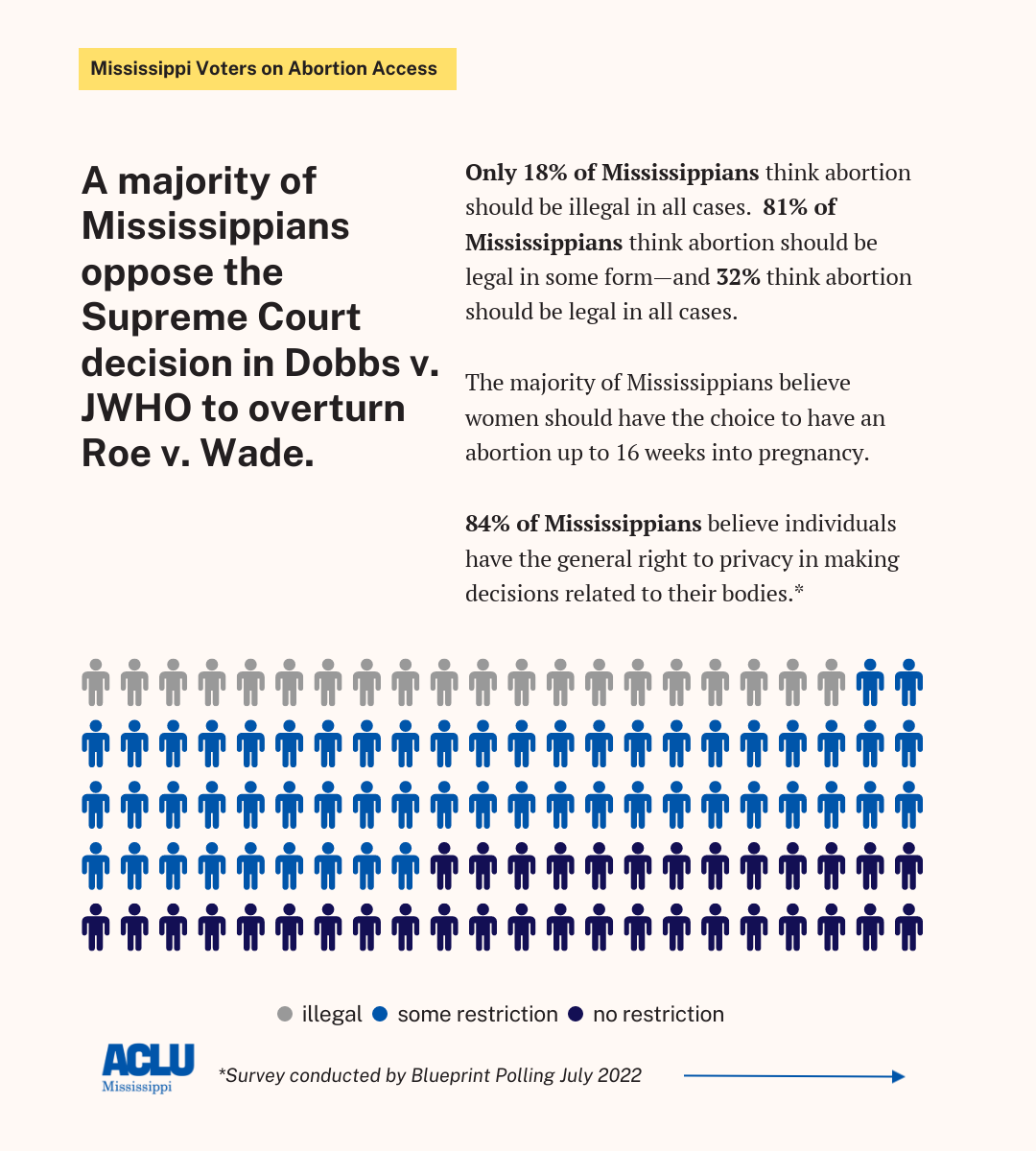 The vast majority of Mississippians (83%) oppose criminal prosecutions or investigations of women for possibly having an abortion. 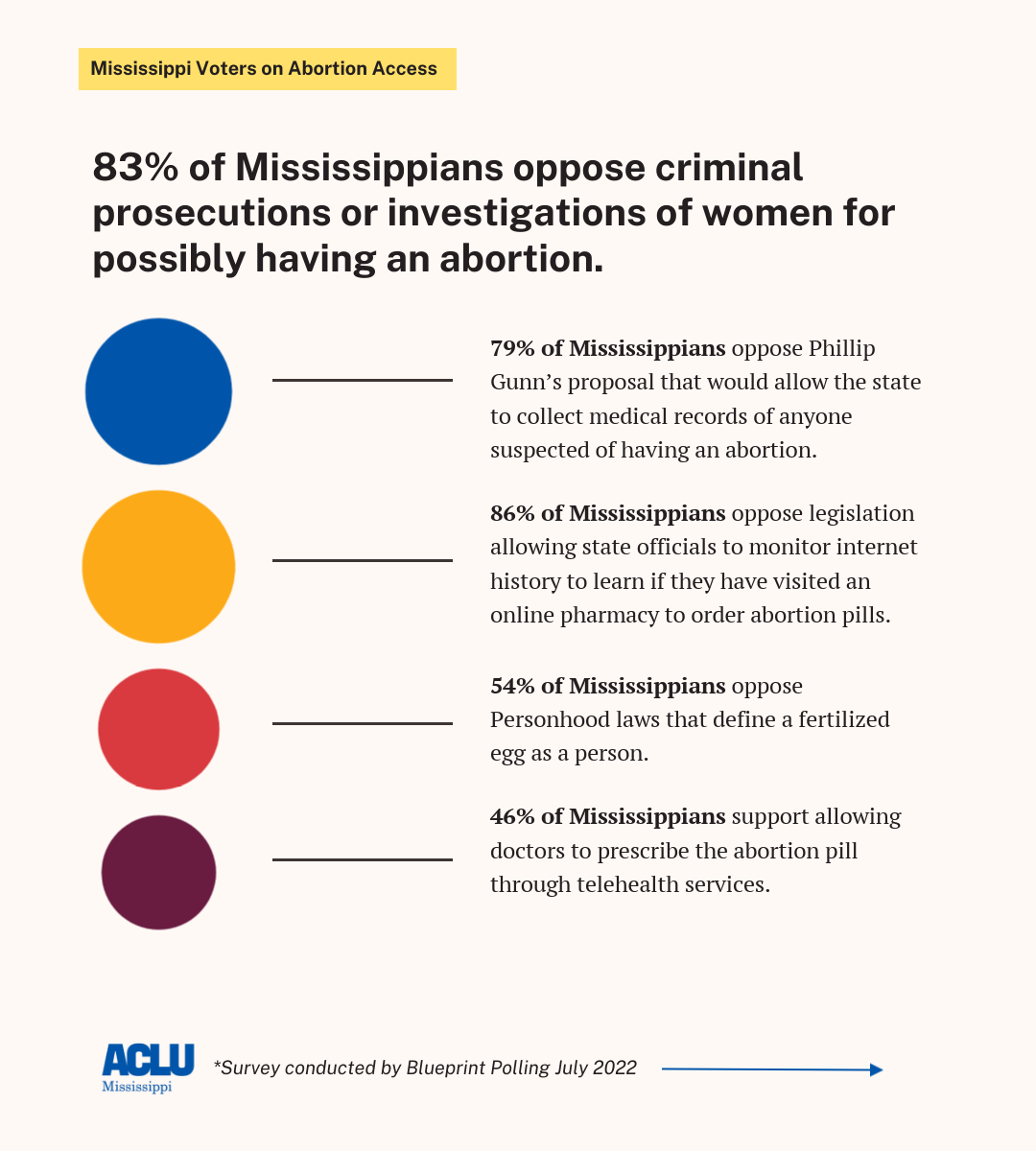 “Mississippians no longer have access to abortion care, forcing people to carry a pregnancy against their will or travel hundreds of miles to access the essential care they need,” said Vara Lyons, Policy Counsel at ACLU of Mississippi. “It’s clear that many of our voters’ are not being represented the way they want to be represented. Our zip code should not reflect our access to abortion.”

Regarding specific legislative proposals, 79% of Mississippians oppose Speaker Phillip Gunn’s proposal to allow the state to collect medical records, including menstrual cycle dates and internet browsing history of anyone suspected of having an abortion.

Even higher, 86% of Mississippians oppose legislation allowing state officials or the police to monitor a woman’s internet history to learn if she has visited an online pharmacy to order abortion pills.

Mississippians also want their lawmakers to take an actual conservative approach to contraception. A great majority of Mississippians, 71%, do not view emergency contraception, such as IUDs and Plan B, as methods of abortion.

“It is evident that Mississippi voters do not want the Legislature to further involve itself in regulating women’s bodies,” said Jarvis Dortch, Executive Director at ACLU of Mississippi. “Until now, the fight about outlawing abortion was a messaging or political game. Now, the Supreme Court has made this a real issue. We expect Mississippi legislators, mostly men, to take up bills that allow police to intrude greatly into the personal lives and health of women. This is no longer a game.” 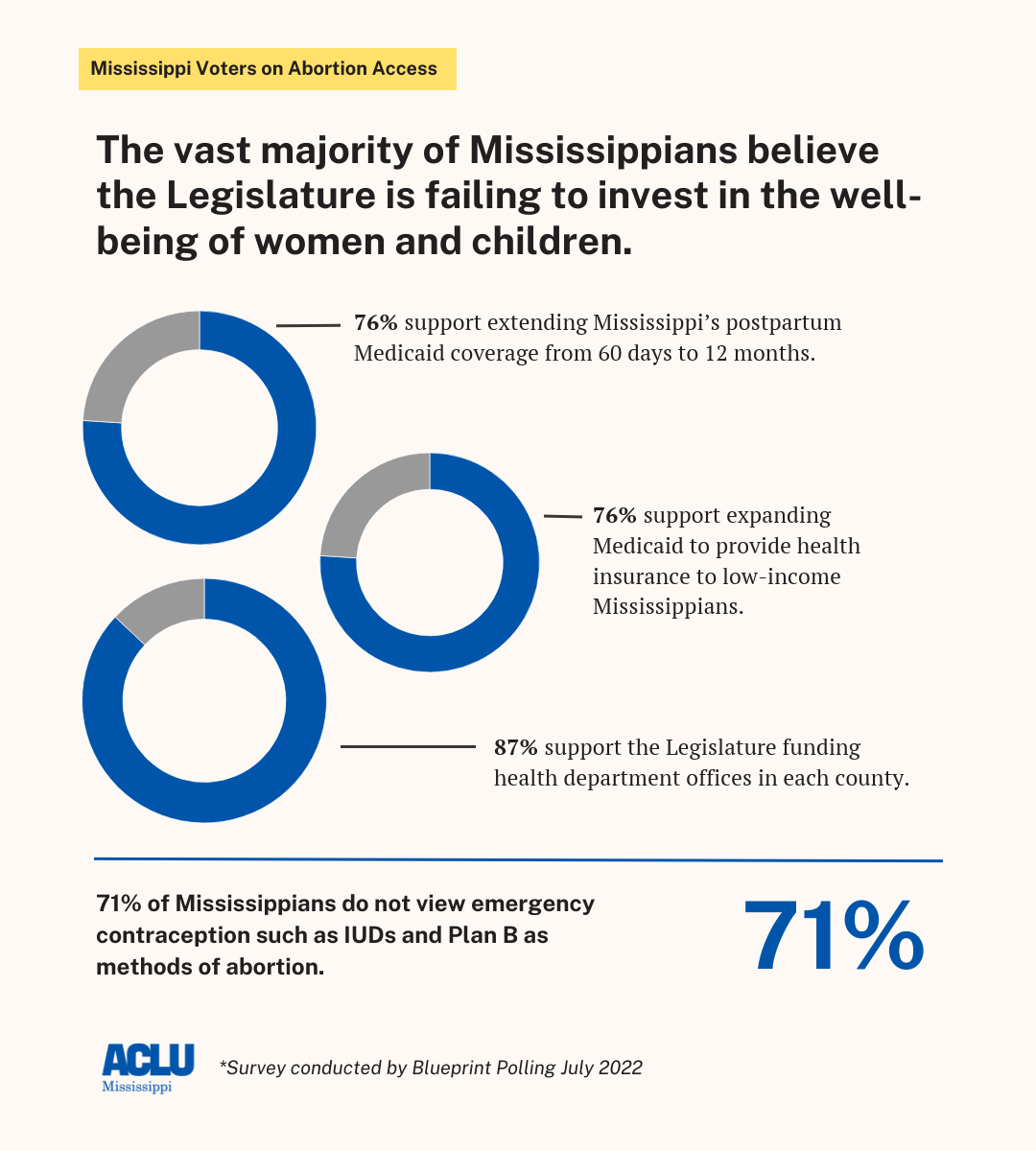 Blueprint Polling is a sister company to Chism Strategies that conducts survey research in federal, state, and local elections. Blueprint conducted this research on behalf of the ACLU of Mississippi. For more information call Brad Chism at 601.918.4563.

The Roe Draft Signals a Potential New Front in the Already-Raging...