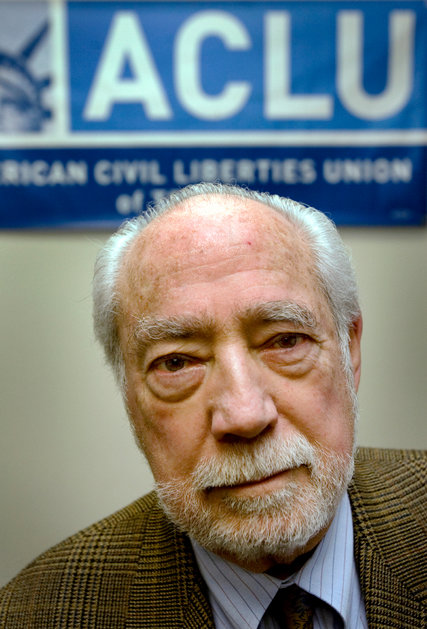 Alvin Bronstein, who wielded class ­action lawsuits like a cudgel to protect America’s expanding prison population from abusive conditions, died on Saturday in Centreville, Md. He was 87.

The cause was complications of Alzheimer’s disease, said Jan Elvin, his wife and a collaborator on the American Civil Liberties Union’s National Prison Project, which Mr. Bronstein directed for 25 years.

Mr. Bronstein came to the cause of civil rights with a deep distrust of state authority, imbued in him by his immigrant father’s accounts of Russian pogroms and his own revulsion over the Holocaust as a teenager.

Early in his career he carried the fight to the Deep South as a civil rights lawyer in the mid­1960s, when defying the Jim Crow culture was dangerous for blacks and their advocates.

It was the bloody 1971 riots over conditions at the Attica Correctional Facility in western New York that inspired him to challenge brutality and overcrowding in the correctional system. At the time, much of the nation was demanding harsher punishment and more prisons in response to rising crime, feeding the growth of what Mr. Bronstein identified early on as the “correctional­industrial complex.”

“Al was responsible for almost all of the major prison reform class­action lawsuits around the country during the ’70s, ’80s and early ’90s,” said Michele Deitch, a former colleague who teaches at the University of Texas at Austin School of Law.

“His efforts played a pivotal role when it came to the humane treatment of prisoners and the transformation of prisons and jails from brutal, lawless institutions to places governed by the Constitution,” she said.

Mr. Bronstein had many victories. In 1966, he won $1,500 in damages from a deputy sheriff for a woman who had been beaten with a blackjack in a Mississippi jail. The decision was described as the first time a Deep South law enforcement official was ordered to pay reparations for abusing a black person.

In the early 1970s, his litigation against an overcrowded Alabama prison system — inmates were sleeping atop urinal troughs in some places — resulted in groundbreaking minimum standards.

In Rhode Island, in 1977, Mr. Bronstein filed a class­action suit challenging unsanitary conditions, inadequate medical care and intolerable violence in the prison system there. In response, a federal judge threatened to close the state’s correctional facilities unless they complied with the Constitution’s Eighth Amendment prohibition against “cruel and unusual punishment.”

In Virginia, in 1979, Mr. Bronstein represented a prisoner who sued over improper medical treatment in the state correctional system. The prisoner said he had been permanently paralyzed when fellow inmates, who had been assigned to the prison hospital, administered excessive doses of an antipsychotic drug to him? at the time, he said, he had been distraught over being denied parole.

The prisoner won $518,000 in damages. The award was said to have been the largest ever obtained by a prison inmate in America.

Mr. Bronstein was also involved in a prison civil rights case before the United States Supreme Court in 1992. The court had been asked to decide whether corrections officials could be held liable if they were aware that a prisoner was at “substantial risk of serious harm” from other inmates but failed to protect him.

The plaintiff had prepared the briefs himself but could not argue his case personally because he was serving a 20­year sentence for armed robbery. Mr. Bronstein did, and won.

Litigation was only the beginning of his legacy. Working through Penal Reform International, a nonprofit advocacy group (he was instrumental in its founding), he also collaborated with progressive prison officials, both in the United States and abroad, to carry out improvements and monitor them. In addition, he joined them in advocating for alternatives to incarceration and for more vocational and educational programs for inmates.

“It is commonplace now, though not yet implemented everywhere, to accept that prisons have to be lawful places and that those detained in them have rights,” said Baroness Vivien Stern, a former secretary general of Penal Reform International. “Al played a large part in bringing about that acceptance.” Mr. Bronstein co-­wrote or edited more than a dozen books. In 1989, he won a $360,000 MacArthur Foundation prize, the so­-called genius award.

In an interview with The Philadelphia Inquirer in 1995, Mr. Bronstein said, “As we began to see real change in the rights of black Americans, partly as a result of legal work, a number of us began to realize that the next powerless group were prisoners.”

“There was a logical extension from the civil rights movement to the prisoners’ rights movement,” he said — just as there was from his upbringing to his commitment to constitutional law.

Alvin J. Bronstein (the middle initial did not stand for anything) was born in Brooklyn on June 8, 1928. His father, Louis, was a pharmaceutical salesman. His mother, the former Lillian Spielman, was a saleswoman in a store.

His immigrant family’s experience of escaping the persecution of Jews in Russia and his hearing about Nazi atrocities during World War II as he grew up fostered in him “a deep distrust of state power,” as he described it. The lawyer Clarence Darrow was his hero.

He graduated from Erasmus Hall High School in Brooklyn, studied at City College of New York and earned a degree from New York Law School.

Uninspired by practicing in his uncle’s law office, Mr. Bronstein in 1964 enlisted in the A.C.L.U.’s Freedom Summer drive for volunteers to help register African-­Americans to vote in Mississippi. He went on to direct the Lawyers Constitutional Defense Committee, an A.C.L.U. arm established that summer to help the civil rights movement in day-­to-day legal matters.

In addition to Ms. Elvin, his wife, he is survived by four daughters, Lisa Snitzer, Susie Renner, Laura Zatta and Sarah Bronstein? a son, Benjamin Bronstein? and seven grandchildren.

“What drives me is protecting individual rights against the excesses of state power,” Mr. Bronstein told The Inquirer. “This is what the Bill of Rights is all about — government can’t conduct unreasonable searches, it has to follow due process, it must allow free speech and assembly, it can’t impose cruel and unusual punishments.

“For a society to have meaningful individual rights,” he added, “it has to protect them for the least desirable element in society.”