#msleg: A Convention of the State is a Bad Idea, and Mississippi Should Not Support It! 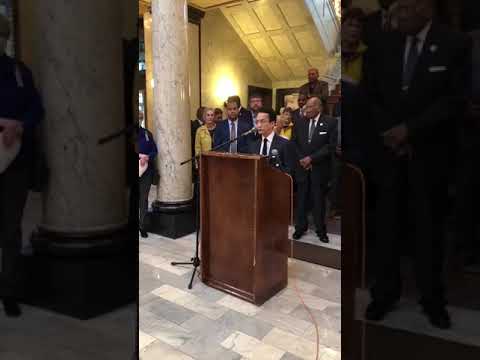 Update 3/27: The Mississippi House followed suit, voting 69-46 to make Mississippi the 15th state to call for a convention of the states.

Update: The Mississippi State Senate voted 32-17 to adopt SCR 596. State leaders claim the convention of the states will take up amendments to impose fiscal restraints on the fedearl government and place term limits on Congress. It's difficult to determine what could actually come out of a convention of the states. We are urging the Mississippi House to kill this bill.

During a news conference today, the ACLU of Mississippi stood with partners Common Cause Mississippi, Children’s Defense Fund, Mississippi Center for Justice, Southern Poverty Law Center (SPLC), Mississippi NAACP, Mississippi Health Advocacy Program (MHAP), and the Mississippi Human Services Coalition to urge the Mississippi State Senate and Lt. Gov. Tate Reeves to vote NO on SCR 596. The Senate Concurrent Resolution, which passed the Rules Committee and now heads to the Senate Floor, supports adding Mississippi to the already 13 states calling for a Convention of the States. If 34 of the 50 states pass similar resolutions, a convention would meet, putting our entire form of government, freedoms and liberties at great risk.

Below is the statement from ACLU of MS Legal Director Joshua Tom:

"A constitutional convention would at a minimum deepen the political divide and put at risk our civil rights and civil liberties. At worst the entire constitution could be up for revision. This is why the ACLU of MS believes that senate resolution 596 calling for such a convention should be rejected.

There are no standards with how a constitutional convention would be convened or conducted and thus no assurances that delegates are fairly representative, that the rules governing conduct of the convention are fair, and that private interests do not exert outsized influence. There are also no checks on what can be considered by the convention or what proposals come out of it. The limits in SCR 596 on what Mississippi delegates can do are unenforceable.

The ACLU of Mississippi and the late Supreme Court Justice Antonin Scalia are in complete agreement when he said, 'I certainly would not want a constitutional convention.  Whoa!  Who knows what would come out of it?'"