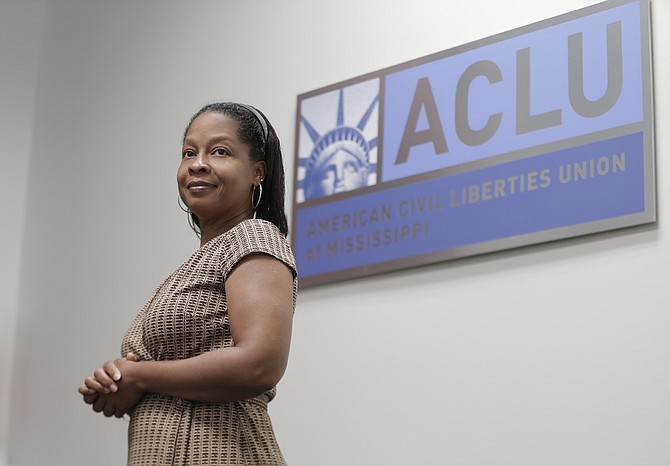 René Hardwick says seclusion of students is “not just time out.” Photo by Imani Khayyam.

JACKSON — CANTON—Volance Sanders' 13-year-old son was in his language-arts class at Nichols Middle School in the Canton Public School District where, he said, another boy kept hitting him. The boy appealed to his teacher for help, but he said the teacher dismissed his complaints, brushing off the other student's actions. So the boy kept hitting him.

"From the classroom, he held me in a headlock all the way to his office, and then when we got to the office, he tried to force me in the chair, and I didn't sit down," the boy said in a 16 WAPT interview in January. "So he tried to grab my legs, and he threw me on the floor and put his knee on my back."

Sanders says the force Ward used to restrain his son was unnecessary. His son, barely 4 feet tall, and only 60 pounds, wasn't fighting, but Ward says that the story previously reported to the media isn't accurate. He says that on arrival in the classroom, he saw the boys were playing but he did not put Sanders' son in a headlock and that he did not mistreat the boy in any way.

"As you know, playing can sometimes turn a little more serious," Ward said. "I was in compliance with district and MDE protocol and policies.

Until recently, however, the Mississippi Department of Education did not have a uniform policy regulating when and how public-school employees should put their hands on people's children.

The Mississippi Board of Education released an updated restraint and seclusion policy this month that inaugurates more stringent regulations for when adults working in public schools can use force in order to handle student behavioral issues.

Other groups, including the ACLU of Mississippi, the Special Education Advisory Council, Parents for Public Education, Mississippi School Boards Association and the MDE Special Education staff met with the Mississippi Board of Education in order to help remold the policy after the first draft became available last April. The updated restraint-and-seclusion policy emphasizes the data-driven Positive Behavior Interventions and Supports approach, which establishes a school-wide social culture that prioritizes behavioral support.

Rene Hardwick, advocacy coordinator at the American Civil Liberties Union of Mississippi, says these guidelines are important for the safety of children, particularly those disproportionately affected by restraint and seclusion policies, such as disabled or traumatized students and students of color. With these guidelines, she says, hopefully restraint and seclusion would not serve as the first response to deescalating behavioral issues inside the classroom.

"You begin with establishing a positive behavioral approach," Dr. Carey Wright, state superintendent of education, said at the March Board of Education meeting.

"It's not a restraint-and-seclusion policy to teach adults how to restrain and seclude children. Restraint and seclusion is to be used as a last resort."

Hardwick says the ACLU feared further discrimination against traumatized children and children with IEPs—the individual education plans assigned to students in exceptional-education programs. So the group wanted to remove mention of IEPs from the new policy altogether, although the policy still mentions it.

"Two of the recommendations that the ACLU of Mississippi put into its public comments and also recommended as an expansion was the exclusion of restraint and seclusion within the IEP, the BIP (behavior intervention plan), and the 504 plan, as a plan to prevention."

A 504 plan is similar to an IEP, except that Section 504 of the Rehabilitation Act establishes 504 plans, and the Individuals with Disabilities Education Act outlines the use of IEPs. Students with 504 plans may not receive specialized instruction like students with IEPs do, but still receive certain special accommodations despite spending most of the school day in their general classrooms.

Hardwick says she'll try again to have mention of these strategies stricken. "It is being used as an escape hatch to give school personnel permission to use it if a child has an IEP," she explained.

Hardwick also says that the ACLU is pushing for the removal of seclusion altogether as an option.

"If we could completely prohibit seclusion, that's just a whole unnecessary piece of the puzzle that would save money that could be put in training, could definitely prevent severe injuries and in some cases death. What purpose does it truly serve? It isn't time out," Hardwick explained.

"Restraint is enough to deal with. The issue of prevention is not just about employing preventative measures solely for the prevention of restraint and seclusion, but employing these preventative and positive measures to increase and enhance academic achievement. So if you do this properly, there are far-reaching implications for school and learning environments as a whole. It's a win-win situation," Hardwick said.

Sierra Mannie is an education reporting fellow for the Jackson Free Press and The Hechinger Report.

For more information on restraint and seclusion, please visit keepstudentssafems.org.