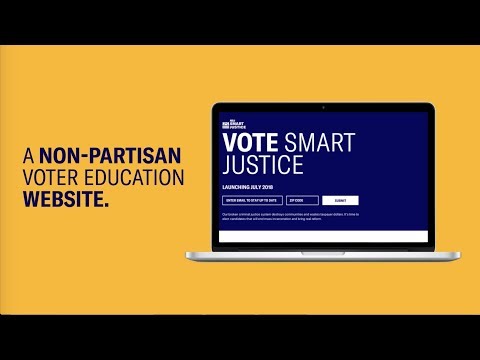 Check out VoteSmartJustice.org: Enter your address and learn how your candidates measure up on reforming abusive policing, cash bail, the war on drugs, broken parole, extreme sentencing, and more.

Did you know that this November you can vote to help end mass incarceration? Criminal justice reform is on the ballot, and you have the power to choose candidates for Congress and your local judiciary who will create a justice system that prioritizes treatment and rehabilitation over prisons. But only if you vote.

It's no accident that Mississippi incarcerates people at the third highest rate in a nation that incarcerates more people than any other country on earth – it's the result of deliberate choices by our elected officials to fuel a racist, unjust criminal justice system. That's why we're arming voters like you with everything it takes to fight mass incarceration and win back our democracy this fall.

Our taxpayer money has been funding the disenfranchisement and destruction of millions of lives by cranking them through the mass incarceration machine. We have a chance to change that in November by electing people who want commonsense, sustainable solutions to this national crisis.

Criminal justice reform is long overdue, and this fall, we can #VoteSmartJustice and elect leaders who will:

Find out your candidates' positions on criminal justice reform. The stakes are high this year, so we need to make sure we're all informed about some of the most significant issues our country has ever faced.